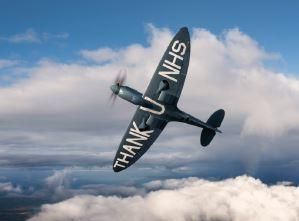 We are so excited to announce that the "Thank U NHS" Spitfire will fly over Warrington Hospital on Sunday 30 August, at approximately 10:54am, conditions permitting.

The aircraft is covered with the names of 80,000 NHS staff, family members, neighbours and friends nominated by members of the public to recognise the huge sacrifices and acts of kindness over the last few months.

The aim of the initiative is to lift the spirits of those across the UK, many of whom are still living in some form of isolation, whilst also thanking the hospitals, communities and individuals who have been at the forefront of getting the country through the pandemic.

The fundraising campaign, which runs until September 20 to align with the Spitfire closing the show at the IWM Duxford’s Battle of Britain Air Show, has so far amassed more than £60,000. The Spitfire will take off from Duxford Airfield near Cambridge at 10am on Sunday, August 30, and fly over Warrington Hospital at 10:54am.

Those lucky enough to catch a glimpse of the blue Spitfire will be able to see the message "Thank U NHS" written across the underside of its wings.

Simon Constable, Chief Executive for Warrington and Halton Teaching Hospitals commented, “We are absolutely delighted that this legendary aircraft is scheduled to fly over Warrington Hospital on Sunday as part of a tour of a number of hospitals across England. It is unique recognition during extraordinary times and we are very honoured.”

To have your name added to the NHS Spitfire click here: https://bit.ly/34I7h0f all proceeds will go to NHS Charities Together.